Episode 35: A Knight In the Tropics and The Squad on Trial

We're back, on time, with a regular episode...  Episode 35: A Knight In the Tropics and The Squad on Trial

First up we look at:

Title: "A Knight in the Tropics"

Stein takes his boys on a Caribbean vacation.... What could go wrong? 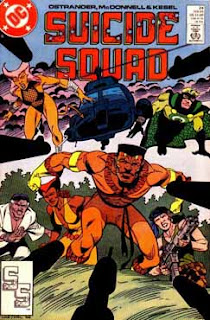 Synopsis: from Mikes
Following the public exposure of the Suicide Squad's activities, Amanda Waller is called to testify before a senate committee led by Warren Eden. To ensure, that the individual Squad members are unavailable to give testimony, Waller sends the team on a mission to East Africa to rescue Sister Agnes Martinon. Nemesis quits the group rather than comply with Waller's orders. Simon LaGrieve also tenders his resignation.
The Bronze Tiger leads the Squad to Africa where they locate the rebel camp where Martinon is believed to be held. They arrive too late as troops from the African nation's current government has already attacked the camp. They have taken Martinon and they have no intentions of setting her free.

Comics With Normies - This is a show where my podcasting buddy Jarrod Alberich gives a comic to a normie and gets their reaction.

Posted by Aaron Moss at 8:01 PM No comments: