Episode 36: BlackThorn and The Trial concludes!

Hey Squadmates.  Here we go with Episode 36: BlackThorn and The Trial concludes!

First up we get a look at Black Thorn:


This issue has several creative teams contributing to one over all story:
Story 1 Title: "Neighborhood Watch"
Pages: 8


Blackthorn is robbed and has to retrieve something precious to her.

Then at 33 minutes in, we get a double Character Profile (yes, it's back for now).  We look at the newest Squad couple, Punch and Jewelee. 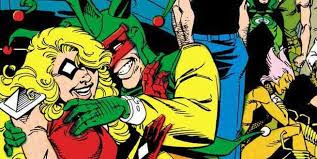 Waiting For Doom: This is where Paul Hix and Mark Garvey (both previous guests) sit around waiting for... DOOM (The Doom Patrol, not the Doctor).

WHO’S WHO – THE DEFINITIVE PODCAST OF THE DC UNIVERSE: Shag and Rob cover the great DC comic book series, Who's Who.

Posted by Aaron Moss at 8:16 PM No comments: